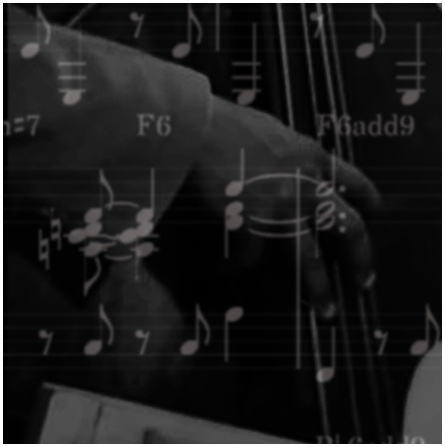 I pinched my right arm until it hurt, certain that I was dreaming.

“Just to be sure we’re on the same page, Niles, I’m talking about an audible background cough, a slight but definite hacking sound, recorded on ‘Laura,’ track 2 of Jazz at The College of the Pacific.”

“Jesus. Do you know what this obsession’s been like? Headaches, insomnia.  Lot  of insomnia.  I’ve been  trying to  locate the source of that cough for 17 months. You have no idea.”

“I can’t fathom it. How could someone hack during a live recording?”

Niles’ smile faded and he placed the album on the counter. “Boy, you don’t have a fucking clue.”

I flinched and sheepishly took a step back.

“The cough you’re referring to, the one that’s been keeping you up at night, belongs to Hardwick Abernathy.” Niles pointed at one of a dozen framed photos on the wall behind him. “That’s Hardwick and  me at  the Chicago Jazz Festival in  ’51.  Hardwick worked sales for Blue Note, EMI, Columbia. Knew the name of every record shop owner from San Antonio to Saskatchewan and all points east and west. He logged more air miles than the most seasoned pilot and visited more cities than a traveling prostitute. Went to towns most black men dared not to enter.

“I invited him to the show that night, December 14 as you noted, but he would’ve come anyway. As for the audience, incidental noise was always captured during live shows. Sometimes we sweetened it out during the mix, sometimes we didn’t. So I paid it no mind. Wasn’t until later, when the house lights came up and the auditorium began to empty, that someone noticed Hardwick was still seated, eyes closed. Figured he’d just nodded off.”

“The sonuvabitch was dead before he ever reached the ER. Found out later it was a brain aneurysm what killed him. Terrible loss. Left behind a wife and two boys.”

Niles pulled a pack of smokes from his shirt pocket and lit a cigarette.

“I suppose not,” I reasoned.

“Now you know the story, you feel any better?”

“Sometimes the answer we’re looking for ain’t what we expect. Not what we’d like it to be.”

The front door opened and Lien entered. “Thought you got lost,” she said.

I paid for my purchases and nodded at Niles. “Thanks.”

“Take care now, and stop back again soon. If you’re lucky, I’ll reminiscence about my whirlwind affair with Billie Holiday.”

Lien and I dashed across the busy street and hopped back in-to the car.

“I’m sorry today’s been a bust,” she said, as we headed west toward Lawry’s. “Maybe some questions weren’t meant to be answered.”

I wanted to share my new revelation with Lien, but felt conflicted. This wasn’t the outcome I’d been anticipating. The thought of telling the story to anyone seemed wrong. Perhaps one day, but not yet.

After lunch, Lien and I returned home and she was soon off to work. As darkness fell upon the Pacific coast, I glanced out the window and watched as a scraggy gray feline dashed along the sidewalk before vanishing in the shadows. I stepped outside, dry kibble secured in my left hand, and made stupid cat noises the likes of which only stupid cat owners can make. The stray, a skinny no-tag mess of matted fur with an obvious eye infection, approached eagerly and was scooped up without protest.

As we headed back, a family dressed in t-shirts, shorts, and sandals emerged from their home. Red and green lights were quickly draped atop a myriad of ill-maintained topiary. The strands glowed as “We Wish You a Merry Christmas” began playing on an endless loop in eight-bit sound to the kids’ delight. Once inside, I acclimated my fuzzy roommate to his new home, taking care to tightly shut the kitchen window.

That night, as New O’Brien slept, I boxed up notebooks, ledgers, receipts, and other papers that had defined my life for the past year and a half. The map and its many push pins came down. I dropped my newly purchased vinyl onto the turntable and sipped hot coffee. Eighty-four seconds into “Laura” a dead man’s cough echoed through my home, as it had done on so many prior occasions. But whatever angst I’d felt previously was gone, replaced with a sense of calm and sorrow. Freedom quickly enveloped me. Freedom from anger and bias. The track continued along at thirty-three and one-third revolutions per minute before dissolving into the up tempo crowd pleaser “Lullaby in Rhythm.”

I fell onto a soft chair, shut my eyes, and soon drifted into a tranquil sleep.

NEXT: Our story continues.